Free Daily tips for Thursday night !  To maximize your winnings bet with 1xBet, Best odds and epic bonuses !!! Register now and get 200% on your first deposit !

Zenit Petersburg (Rus) vs Molde (Nor)

Zenit needed a massive turnaround to book their place in the final round of qualifiers in the Europa League, but can they continue that momentum? They clash with Molde on Thursday night, after the Norwegian side dumped out Hibernian in the previous round. While the visitors outclassed Scottish opposition in the previous round, are they now out of their depth against the Russian giants? This is certainly a tough trip for the Eliteserien outfit, who are looking to bounce back from a weekend defeat.

Zenit had no such trouble on Sunday, as they beat Ural 4-1 to continue their perfect start to the Russian Premier League campaign. That followed up an incredible 120 minutes of action on the previous Thursday, as Zenit turned around a 4-0 deficit against Dinamo Minsk. After their first leg defeat, the Russians hit four to force the tie to extra time. They hit another four in the added 30 minutes to record an 8-1 win, progressing 8-5 on aggregate. Zenit must strike fear in to opponents on that form, especially a side like Molde.

The visitors were able to hold out in their last European away trip, getting a 0-0 draw at Hibs, before a 3-0 home win took them through. However, they didn’t look that solid on Sunday, as they lost 3-1 away to Stabaek in the Eliteserien. A defensive display like that in Russia could be a disaster, given how impressive Zenit were in their last European clash. They finished on a high, and now Molde have to be wary ahead of this trip.

The Norwegian side have scored in eight of their last 10 away matches in this competition, but can they land a blow away to Zenit? While the hosts racked up the goals in the last game, they haven’t looked entirely solid at home. They come in to Thursday’s play-off clash with a single clean sheet in their last six home matches in this competition, so don’t write off an impact from the Molde forwards.

However, on current form there’s only one winner here. Zenit have been made heavy favourites to take a first leg lead, and their price suggests this is going to be a comfortable win. With 24 goals in seven home matches in the Europa League, the Russians are certainly strong enough going forward to notch up the goals in this qualifier. They won’t want the second leg pressure they had last time out, and fresh from a 4-1 home win they can certainly avoid that. We’re going with a high scoring encounter between these two, with over 2.5 goals our tip.

Atalanta face the toughest test of their first European qualifying campaign, as they meet Copenhagen on Thursday night. La Dea have hit form as they push for a return to the group stage of the Europa League, but they face a side who have much more European experience. The Danish side matched Atalanta’s run to the last 32 of this competition last term, and the year before that they were facing off with Leicester and Porto in the Champions League – a competition the Serie A side have yet to play in. However, one of these two will miss out on the group stage draw at the end of this month.

Atalanta started their Serie A campaign off on Monday night, as they cruised past Frosinone 4-0. They’ve excelled in recent weeks, with three straight wins in Europe bringing them to the finale of the qualifying campaign. After their brilliant European campaign last season, la Dea will be desperate for that kind of excitement yet again. They were energised with their continental clashes, and so far this term they’ve shown the same enthusiasm, so we expect the Italian side to book a group stage spot.

However, they’re playing a solid side in Copenhagen. The visitors have started off the new Superliga season well, topping the pile after six games. They’ve been in the Europa League qualifiers since mid-July, kicking off in the first round. They’ve won five of six games, and their 4-2 aggregate success over CSKA Sofia in the last round should give them confidence. They head in to this clash with eight victories in their last nine, but can that form carry over to their meeting with Atalanta?

There is a clear gulf between the impressive Serie A unit and the visitors. Atalanta have won four of their six matches at home in the Europa League, and we see them building on that in this first leg. After racking up 14 goals across their last three games in Europe, la Dea have more than enough firepower to secure a win at home. However, the visitors will be looking to continue their scoring run against a questionable defence.

The hosts have conceded in eight of their last 11 in the Europa League. Minnows Sarajevo found the net twice here earlier in the qualifiers, while Copenhagen have scored in 11 of their last 12 Europa League games, so they should pose a threat going forward. Given the form on the Danish side, we are backing them to find the net in this trip.

Atalanta win and BTTS, along with a 2-1 victory for the Italian side.

Sevilla have had to make an early start this term but the group stage of the Europa League is now within touching distance and they will firmly expect to see off Sigma Olomouc both on the night and over two legs. It’s a big occasion for the Czech club but they couldn’t really have had any tougher a draw here and they will do well to stay in this tie for long.

While they enjoyed a fine Champions League win at Old Trafford, Sevilla were actually pretty disappointing last season, sacking two coaches and only finishing 7th in La Liga. Pablo Machin has come in and done a great job so far though. They’ve made easy progress in Europe with 7-1 and 6-0 aggregate wins in a competition they love so much and they were very impressive on match-day one in La Liga. An Andre Silva hat-trick inspired a 4-1 away win at Rayo Vallecano and in truth it could have been much more.

Therefore it’s a tough task that awaits Sigma Olomouc here. The Czech side are playing in the Europa League for the first time since 2009 when they lost to Everton at this stage. They entered in the 3rd Qualifying Round and impressively beat Kairat of Kazakhstan 4-1 on aggregate although clearly this is a pretty major step up in class for them.

Overall, it’s hard to see any result other than an away win. Sevilla have a squad that is equipped to deal with a challenge on more than one front. They left the likes of Nolito, Aleix Vidal and Luis Muriel on the bench at the weekend so they have plenty of quality to bring in here and the early signs are really positive under Machin. They’ve won 5 of their 6 competitive games under him so far with the exception being a narrow defeat to Barcelona in the Spanish Super Cup.

They’ve been scoring freely too with 3 goals per game scored on average under the former Girona boss. While Sigma Olomouc did well in the last round, their start to the league season is also a worry for them. 4 defeats out of 5 so far this term in the Czech League represents a very poor start and against opponents from one of the strongest leagues in the world, there is a danger they could be outclassed. 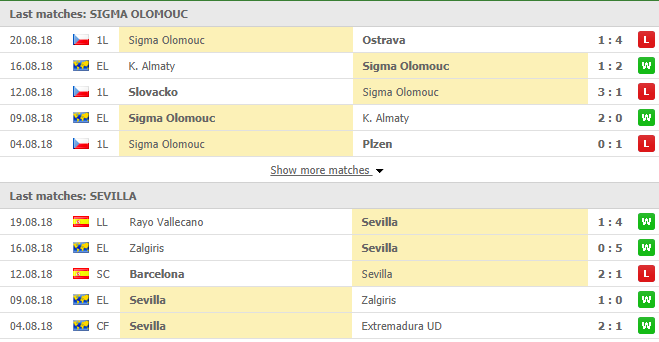