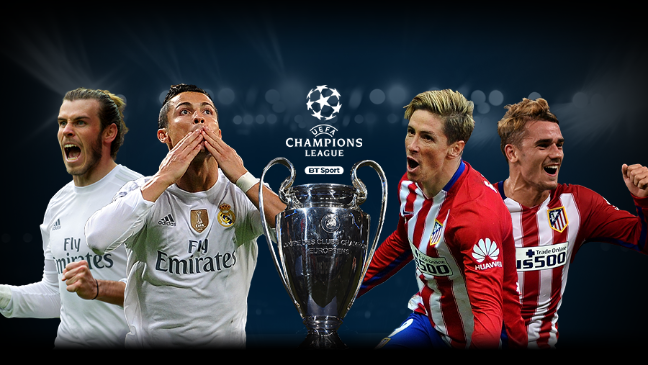 Real Madrid v Atletico Madrid. These two old foes have become all-too-familiar with one another on the European stage. Real have won four of the last five Champions League’s – which is a simply ridiculous stat when you sit back and digest it – beating their neighbours in two of these finals.

Diego Simeone’s men will count themselves desperately unlucky not to have won Europe’s biggest prize. Their first final defeat to Real included a last-minute Sergio Ramos equaliser before succumbing 4-1 after extra time, while their second defeat two years later was decided by a penalty shootout.

Their Europa League triumph last season ultimately came as little surprise – a team of Atletico’s genuine world-class quality has little right to be competing in that tournament, as Arsenal discovered – but their ultimate aim is getting their hands on the big one.

As for Real, they secured an unprecedented, mind-boggling third straight Champions League after beating Liverpool in May. A Loris Karius-inspired second half performance saw Los Blancos re-write European history.

The UEFA Super Cup annually pits the Champions League and Europa League winners against each other, and victory for Atletico would be seen as a slice of retribution over their neighbours.

It’s our proper first chance to see Julen Lopetegui in the Real dugout – following his removal as Spain manager on the eve of the World Cup after the announcement of this position – in what will be a major culture shock for his new side.

Their unprecedented success under Zinedine Zidane simply cannot be replicated. Succeeding a manager who won so much in such a short period of time, at a club as cut-throat as Real, is basically impossible.

This will be augmented by Cristiano Ronaldo’s departure to Juventus. How do you replace the irreplaceable? I find it hard to see how Real will be the same force as the last few years without Zidane and Ronaldo.

On the other hand, Simeone’s Atletico are a well-oiled machine. The familiarity the players have developed with each other during the Argentine’s seven years at the club has made them one of the hardest teams to beat in Europe. Barring David de Gea, Jan Oblak is arguably the best goalkeeper in the world, who is lucky enough to play behind Diego Godin, Jose Gimenez and Stefan Savic. Their defence and resilience is frighteningly good.

On the night, we can see it being a bit of a stalemate. Atleti will play their usual game and frustrate Real, who will still be finding their feet under Lopetegui. The odds for a draw after 90 minutes seem very generous, particularly because it seems like the safest bet of the lot.

The Super Cup will give us a first sighting of some of the new signings made by both sides. £63m winger Thomas Lemar should get his first competitive taste of action in an Atletico shirt. The Frenchman was touted for move to a whole host of European clubs, but his transfer to Atleti shows then can still compete in crazily competitive and inflated transfer market.

Disgraced Croatian striker Nikola Kalinic – sent home from his country’s World Cup squad in Russia for refusing to come off the bench to play (missing a run to the final in the process) – increases their options up-front, and may well start on Wednesday, if he decides he wants to.

Real’s marquee signing thus far has been goalkeeper Thibaut Courtois, strengthening a position which was probably the least of their concerns, particularly when there is the small matter of replacing Ronaldo on the agenda.

It’s unclear whether Courtois will be preferred over Navas in the Super Cup – the Costa Rican deserves to play after being a key part of Real’s recent success – but president Florentino Pérez is all about those Galáctico names in his team.

My hunch is Atletico will lift the trophy. Whether it’s in the 90 minutes, extra-time or penalties, they will have so much desire to get the better of Real. Again, the odds are very generous for this result, particularly considering Real’s current state of transition.

One player who is often the centre of attention – for better or worse – is Diego Costa. The Spaniard certainly left an impact on the Premier League during his three years at Chelsea. He was a nasty piece of work at times but also a genuine goalscorer, and a man who thrives playing against niggly, combative centre-backs such as Ramos.

With Antoine Griezmann likely not to feature following a long World Cup campaign for him and his victorious French side, Costa should be nailed on to start if Atleti want to get their hands on the trophy.

It won’t be a high-scoring affair, but if Atletico do find the net, chances are it will be created through Costa’s industry and tenacity. He scored a brilliant solo goal in the World Cup against Portugal, and is capably of bullying defenders and finding openings all by himself. Diego Costa to score at any time is a nice price.

Register now on 1xBET and get BEST ODDS AND AWESOME BONUSES up to 200% !