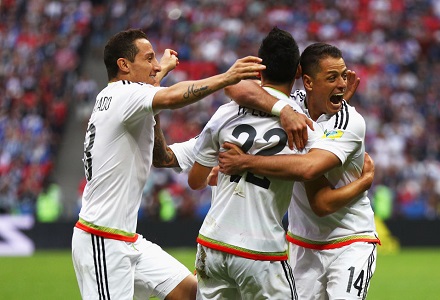 Germany topped Group B ahead of Chile and as a result they face Mexico, who missed out to Portugal on goal difference in Group A. However, while Germany kept nine clean sheets in 13 games across the last Euros and World Cup, they’ve looked more vulnerable here without the likes of Neuer, Hummels and Boateng as they’re yet to keep a clean sheet at the tournament. As a result, Mexico will fancy their chances of an upset, though they themselves are searching for their first clean sheet and so we could see goals.

Germany are unsurprisingly the top side in our rankings, but this is far from a full strength German side, whilst we have the Mexicans 7th in the world and so we’re not so sure the World Champions should be as short as 1.57 to make it through to the final. The Germans have in fact lost four of seven winless games against top-15 ranked sides since 2015, keeping only one clean sheet across these, and so we’re looking to take them on at 2.1 to win in the 90.

Mexico have lost only one of their last 16 games, whilst they’ve lost only one of their last nine against top-15 ranked sides, beating the likes of Chile and Uruguay in that time. They’ve scored twice in all three of their games so far, with all these goals scored by different players as they have threats all over the pitch and so we think they can cause Germany plenty of problems. We’re siding with Mexico Draw No Bet at 13/8, whilst we’re also going to back Over 2.5 Goals at 7/8.